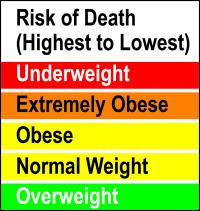 "It's not surprising that extreme underweight and extreme obesity increase the risk of dying, but it is surprising that carrying a little extra weight may give people a longevity advantage," said David Feeny, PhD, coauthor of the study and senior investigator for the Kaiser Permanente Center for Health Research.

"It may be that a few extra pounds actually protect older people as their health declines, but that doesn't mean that people in the normal weight range should try to put on a few pounds," said Mark Kaplan, DrPH, coauthor and Professor of Community Health at Portland State University. "Our study only looked at mortality, not at quality of life, and there are many negative health consequences associated with obesity, including high blood pressure, high cholesterol, and diabetes."

The study examined the relationship between body mass index and death among 11,326 adults in Canada over a 12-year period. (BMI uses height and weight to estimate body fat.) Researchers found that underweight people had the highest risk of dying, and the extremely obese had the second highest risk. Overweight people had a lower risk of dying than those of normal weight.

This is the first large Canadian study to show that people who are overweight may actually live longer than those of normal weight. An earlier study, conducted in the United States and published in 2005 in the Journal of the American Medical Association, showed similar results.

For this study, researchers used data from the National Population Health Survey conducted by Statistics Canada every two years. During the study period, from 1994/1995 through 2006/2007, underweight people were 70 percent more likely than people of normal weight to die, and extremely obese people were 36 percent more likely to die. But overweight individuals were 17 percent less likely to die. The relative risk for obese people was nearly the same as for people of normal weight. The authors controlled for factors such as age, sex, physical activity, and smoking.
Posted by Jonathan Kantrowitz at 2:07 PM